The High Cost Of Ignoring U-Joints

A u-joint may be a small part, but it plays an important role in the smooth operation of your drivetrain. U-joints should last the life of the vehicle, but sometimes that’s not the case. U-joints can go bad over time.

If your u-joints go bad, it would be unwise to put off replacing them.

What Does A U-Joint Do?

Newer trucks often have two piece driveshafts. These usually have three u-joints, with one at each end, and one in the middle.

Signs Of A Bad U-Joint

If you notice one or more of the following signs, chances are good that one of your u-joints is on its last leg.

Ignoring a failing u-joint can lead to more expensive problems down the road. Let’s talk about some of the most common things that happen when u-joints finally fail:

The vibrations caused by a bad u-joint cause the driveshaft’s stub shaft to rotate out of round. This causes the transmission’s rear seal to fail.  Fluid will leak out of the transmission. If the transmission loses some fluid, it can’t shift right. It would only do hard shifts. If the fluid gets low enough, the transmission will eventually fail. The same thing can happen to a transfer case.

A bad u-joint at the rear of the driveshaft can ruin the pinion seal, in the same way the transmission seal can be ruined.

If they go on long enough, the vibrations from a bad u-joint can damage any of these bearings:

A bad u-joint will eventually fall apart if it’s not replaced. When they fall apart, which happens when you’re moving, the driveshaft will become disconnected from the transmission or differential. This will damage the driveshaft, perhaps other parts under the car, and if you are lucky, you will coast to a stop. Then you’ll have no choice but to fork over hundreds of dollars for a tow truck. You’ll also have to spend a lot more money on an emergency repair. It’s amazing how such a small part can cause so much damage, isn’t it?

U-joints tend to fail during hard acceleration. A catastrophic failure on a highway on-ramp, for example, can be a big problem. When that happens, your car won’t have power and possibly cause a serious collision with the car(s) behind you.

When In Doubt, Replace Your U-Joints 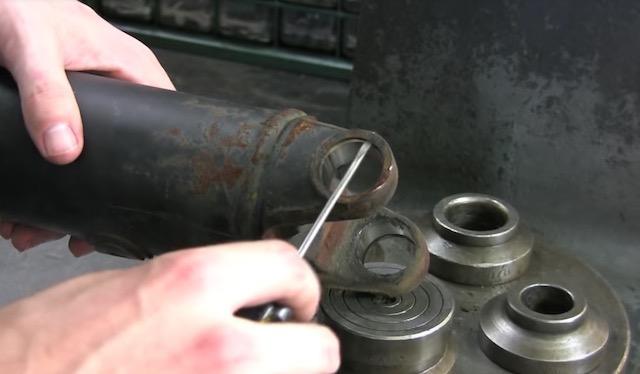 If you’re not sure if your u-joints are still good, replace them. Replacement u-joints are pretty inexpensive. It’s also something you can do yourself if you have the right tools. Here’s an overview of how to replace the u-joints in a simple one piece driveshaft:

U-joints are instrumental to the smooth operation of the drivetrain. That’s why quality replacement u-joints make a world of difference.

Why GMB U-Joints Are The Best On The Market

GMB is a leading brand for u-joints. We manufacture world-class maintenance-free u-joints to OE specs.

Here are some of the features that set GMB u-joints apart from the others: