When Is It Time to Replace Your Fuel Pump?

The answer to “When is it time to replace a fuel pump?” is simple: When the pump has become defective. The problem is, how do you know when your fuel pump is defective? Fuel system problems can be hard to diagnose.

These are common symptoms of a potentially bad fuel pump:

But, with the exception of a whining noise from the fuel tank, these are also symptoms of problems with a half dozen other systems. Determining if a fuel pump is to blame for a lack of power under “load” is often about ruling out other possible issues.

Here’s how you go about diagnosing fuel system problems, so that you can determine if you need a fuel pump or not.

Figure Out The Type Of Pump You Have

Your first step in diagnosing a fuel pump problem: Figuring out if your vehicle has a mechanical fuel pump or an electric fuel pump.

HINT: If your vehicle has a large air cleaner (filter) on top of the engine to filter air going into the engine, you likely have a carbureted engine. 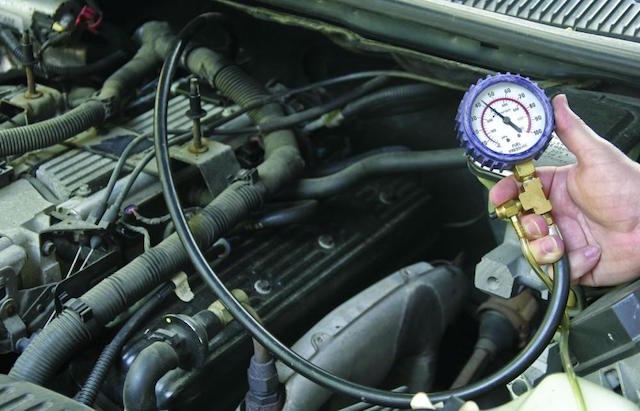 A fuel system pressure testing tool is essential equipment for diagnosing a faulty fuel pump. Just make sure to use one that’s accurate (see note). Image courtesy of CarNewsCafe

If the vehicle will not start at all but the engine will crank (turn over without starting) when the key is turned, the problem could be fuel delivery. Again, testing for fuel pressure can determine whether this is the case. Another simple test is to turn the key to the “on” position without starting the vehicle and listen for the fuel pump. An electric fuel pump makes a quiet whine during initial activation, and this can be heard from outside the vehicle.

Finally, if your vehicle engine is sputtering or dying out after running for a while without problem, diagnosis can be tricky. This usually happens when the engine spends some time at cruising speeds and is then slowed down at a stop light or stop sign. In this scenario, the engine can sputter for more reasons than we can list.

However, if you have a sputtering engine and a “lean mixture” check engine code, that may indicate a fuel pump problem. The diagnosis process here is to bring the engine up to temperature and then do a fuel pressure check.

Replacing a faulty fuel pump is not a simple task. It involves dropping the fuel tank, removing and replacing the fuel pump assembly, and then testing all work. A fuel pump replacement should also be accompanied by a fuel filter replacement and a check of the pump’s connectors (on both sides of the plugs) to ensure they are not burnt or overworked.

When you purchase a GMB fuel pump, we offer free technical support both online and by phone. Visit our catalog page to see what fuel pump options we have available for your vehicle.