Under normal circumstances, timing belts last between 60K and 100K miles. It’s important to service timing belts and related parts before failure happens. If your timing belt breaks while driving, you’ll run into a variety of engine issues. In this post, we’ll cover the most common issues that may happen when a timing belt snaps in a running engine.

First, let’s talk about the important role of timing belts.

Why The Timing Belt Plays An Important Role In The Engine

What Happens If Your Timing Belt Breaks On The Road

To put it quite plainly, your engine will stop working. If you have an interference engine, you’ll also likely see some significant engine damage, such as:

It’s possible for timing belt failure to lead to thousands of dollars in engine repairs. This type of engine damage occurs because when your timing belt breaks while the engine is operating, the camshaft stops turning. Yet, the crankshaft will keep turning due to inertia. As a result, the pistons will still rise in the cylinder and crash into the valves.

What To Do If Your Timing Belt Breaks On The Road 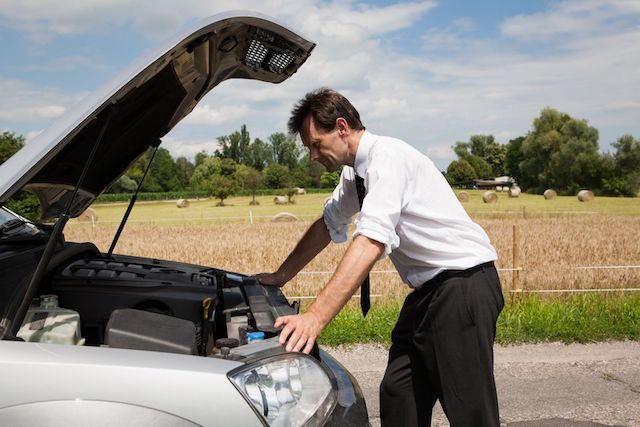 Often times, timing belts break without warning. Once it happens, the engine immediately has problems. Your engine will stop running right after the timing belt snaps while driving. With an interference engine, extensive damage can occur right away. The only thing you can do is try to coast to a safe spot and call a tow truck.

There will be no way to start up the engine again unless you install a new timing belt (and fix any engine damage that has occurred).

It helps to look out for the most common signs that a timing belt is going bad:

However, most often there won’t be any symptoms. The timing belt will simply break one day. That’s why it’s very important to replace them on schedule.

When it comes to maintaining timing belts (and other parts like the water pump), prevention is key. When your timing belt breaks on the road, the situation can become chaotic real quick. Timing belts are relatively inexpensive to service. If you maintain your vehicle’s timing belt system, you don’t have to worry about unexpected costs that arise. It can get quite expensive when you’re stranded on the side of the road with a broken timing belt.

Are you looking for more information about maintaining the timing belt system? Check out this webinar (insert link here) by GMB, Import Car, and Underhood Service. You’ll gain useful nuggets of knowledge about: