On a heavy duty water pump, you’ll find a weep hole. Sometimes it will get clogged. Even though it may seem like a minor issue, it’s actually something you have to address right away. Ignoring the problem will cause more serious problems down the road.

What’s a Weep Hole and How Does it Work? 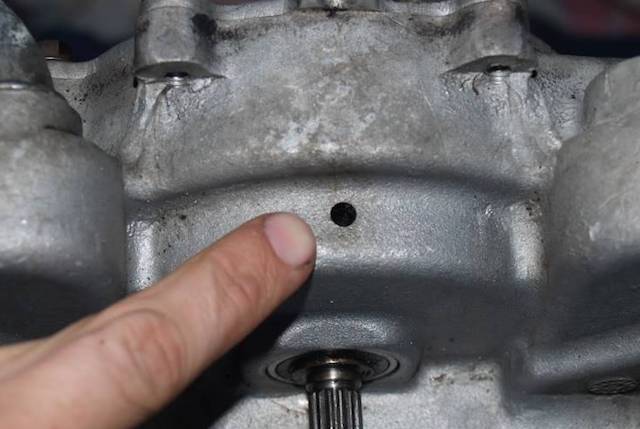 If the oil seals are leaking, extra lubricant from the pump bearings will drip out of the housing through the weep hole. Without a weep hole, oil would leak into the coolant and/or coolant would be forced past the oil seals and contaminate the engine oil.

So what does it mean when coolant or oil leaks out of the weep hole? If you see coolant, it means that you have a leaking coolant seal. If you see oil, then there’s a bad oil seal. Don’t be alarmed if you find a small amount of moisture or even oil around the weep hole; it’s pretty normal. You should be looking for significant leaks.

Sometimes the weep hole will get clogged, resulting in an underperforming or failed water pump.

What Happens When the Weep Hole Gets Clogged?

With a clogged weep hole, the leaking liquid (either oil or coolant) gets stuck in the housing because it can’t drain out. Eventually it will push past the seals separating it from the other fluid, resulting in contamination. For example, oil that leaks past the oil seals will eventually be forced past the coolant seals and end up contaminating the coolant.

Oil/coolant contamination leads to a bunch of serious problems within the engine and/or cooling system. This is why it’s important to take action as soon as you notice a weep hole clog.

The Best Way to Address a Clogged Weep Hole

You should unclog the weep hole. But a clogged or leaking weep hole means that the water pump has bad seals. It’s better to just replace the entire water pump assembly once you find a clogged weep hole to avoid further issues.