Did you know that synthetic oil wasn’t widely used until 80 years after Karl Benz created the first real automobile in 1886? Until synthetic oil hit the mainstream market in 1966, cars ran on conventional oil that was often crude.

Both conventional motor oil and synthetic motor oil have become refined over the years. In this article, we’ll explore the main differences between both types of motor oil. 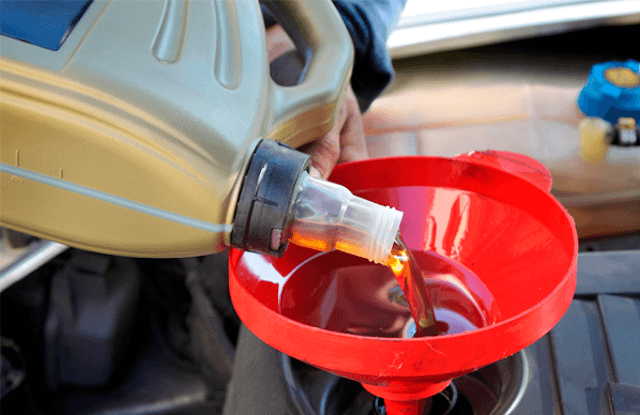 Conventional oil is fossil oil (or dinosaur juice). In order for conventional oil to work optimally in engines, it must be as clean as possible. So modern conventional motor oil is heavily filtered before hitting the shelves.

Synthetic oil is a lubricant that’s made by chemical compounds. Sometimes synthetic oil will contain chemically altered petroleum components. It was invented to solve some of the problems surrounding conventional oil.

Why You Should Avoid Synthetic Blends

Synthetic blends are a mixture of synthetic oil and conventional oil.

You may be tempted to save a few bucks on a synthetic blend. We’re telling you that it’s a bad idea. First of all, synthetic blends aren’t regulated and youd be taking a gamble on the quality of the oil. Second, you might be overpaying for the blend because it may contain 99% conventional oil and only 1% synthetic oil. Blends don’t offer the same kind of protection as pure synthetic oil does.

To compare both types of motor oil, let’s go over the three most important factors to consider:

The whole point of having oil in your motor is to keep the engine parts lubricated at all times. Many engine parts are always rubbing against each other while moving at high speeds. Without oil serving as a slippery barrier between the parts, they will grind together and wear down quickly.

Synthetic oil. It’s because conventional oil breaks down much faster than synthetic oil. When oil degrades, it doesn’t provide as much lubrication.

3. Ability to Flow in Cold Temperatures

When the engine is off, the motor oil sits in the oil pan. Conventional oil gets a little thicker in cold temperatures when it sits for a while. When you fire up the engine, it takes a while for conventional oil to warm up and achieve the right thin, runny consistency to flow through the engine.

Synthetic oil doesn’t have that problem. It doesn’t contain hydrocarbons that thicken up in cold temperatures. Synthetic oil is engineered to flow right through the engine as soon as you start it up.

Which Type of Oil is Better For My Car?

Many older cars have seals and other components that are worn. Synthetic oil has detergents that could push out deposits that have been acting as seals. This could encourage leaking. Don’t let the old engine design in your car keep you from considering synthetic oil, though! Switching to synthetic oil could prolong your car’s life.

We suggest bringing the car to an experienced technician and have him/her make the necessary seal replacements first. Once your technician gives your car the green light to run on synthetic oil, you should be good to go.

However, before you go through all that trouble, take the time to decide whether switching to synthetic oil is even worth it. Even though synthetic oil generally works better than conventional oil, it may not be the best option for your car.

Sometimes it’s just easier to stick to conventional oil if: