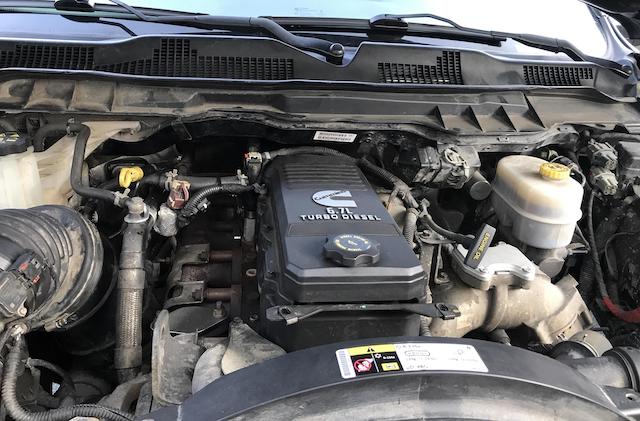 Diesel engines run at much higher compression ratios than gas engines. The force of the explosions in each cylinder cause vibrations that then cause cavitation in coolant.

Cavitation is the creation and very quick implosion of microscopic bubbles in the coolant. Unlike most bubbles, cavitation bubbles have no air inside of them. There is a vacuum inside a cavitation bubble. The vacuum is one reason cavitation bubbles rapidly collapse. Bubbles may sound harmless, but they can impact engine components with a force of 60,000 PSI. This microscopic jack hammering over time causes erosion of engine components. In diesel engines with wet cylinder liners, the erosion can actually create microscopic pinholes right through the liner. When this happens, the engine may start burning coolant, or the coolant will end up in the oil pan. Either way, the engine will have to be rebuilt.

To counteract the effects of cavitation, diesel coolant contains special additives (primarily nitrite). Nitrite works by coating the metal components that are in contact with the coolant. The nitrite coating cushions and absorbs the impact the cavitation bubbles. However, the additives in diesel coolant degrade relatively quickly. It’s not uncommon for diesel engines to require new coolant after as little as 30,000 miles. There are some longer life coolants on the market, but not all diesel engines can use them.

When a diesel engine is running on worn out coolant, it’ll run into a number of engine problems as a result of excessive cavitation, including:

It’s highly recommended to inspect the coolant every 6 months to avoid the engine issues listed above. These issues aren’t cheap to fix. The saying, “an ounce of prevention is worth a pound of cure” especially rings true here.

The Most Common Signs of Bad Coolant in a Diesel Engine

Cavitation and erosion damage on a cylinder liner

When inspecting the coolant in a diesel engine, you want to look for the most common telltale signs that the coolant is no longer good:

You can also use specialized tools to test the coolant, such as litmus paper, a hydrometer, or a refractometer. However, these tools aren’t always accurate so when in doubt, flush the coolant.

If there’s a part (like the water pump) that has failed or started to fail, it’s best to replace it while flushing out the coolant. You want to go with a reliable and high quality replacement part, like a GMB water pump.